By Donnis Baggett, Lucky B Bison

Five-thirty in the morning is too early for your “A” game. Way too early. Especially when it comes to penning a buffalo on a moonless night.

“Don’t forget to check the gates,” my bride, also known as Beverly Brown, had reminded me the night before. Beverly recited that mantra often, and I wondered if she thought I was soft in the noggin.

No way would I forget to latch a gate — especially the gate to her pet bison’s private quarters. Yet there I stood, staring slack-jawed at an open gate an hour and a half before daylight and wondering how not one but two chains had managed to unsnap themselves after I’d used that gate the night before.

Who could possibly be responsible? Poltergeists, perhaps? Aliens from Planet 9? The Buffalo Field Campaign? Regardless, Reaganne — a bottle-raised, 1,300-pound, 14-year-old virgin bison who preferred her private quarters over the pasture, had escaped. This was not good.

Beverly was — and still is — head-over-heels about Reaganne. I knew that Reaganne would be given a pass when the inevitable court of inquiry convened. I, on the other hand, could not expect such merciful treatment.

As a veteran observer of the human condition, I knew that my standing in our little animal kingdom ranks below that of Reaganne, the other members of our bison herd, six pampered dogs and two barn cats whose prey of choice was Little Friskies. And of all the critters to be missing this dark morning, it had to be Reaganne.

Reaganne was born in 1999, shortly before Beverly and I met. Her privileged life began when a sick cow died at full term with a husband-wife veterinarian team at her side. As the old cow drew her last breath the vets performed a hasty C-section and handed the little red heifer to Beverly.

She promptly named the calf Reaganne after her father, former Texas Agriculture Commissioner Reagan Brown, who had died at the ranch three weeks prior to Reaganne’s dramatic arrival. The two-legged Reagan, who had a flair for making an entrance and entertaining a crowd, would have appreciated that.

The first four months of Reaganne’s life were spent in Beverly’s backyard in town to make bottle-feeding more convenient. One chilly February evening, Reaganne slipped and fell into the backyard pool. One of the dogs, a labrador retriever, decided an evening dip was a marvelous idea and jumped in to play. Beverly, who was clad in jeans, coat and barn boots, jumped in without hesitation to rescue her baby.

Reaganne’s life as a city girl came to a halt when the homeowners association president called to ask if the rumors were true: Had a baby buffalo calf taken up residence in Beverly’s backyard? Seems there were problems with deed restrictions and such. Who would think that bison would be persona non grata in a yard adjoining the 15th fairway?

It was time to move to the ranch. As Reaganne grew out of calf-hood and into an adult, two things became apparent: One, she didn’t like buffalo. She considered them unkempt ruffians who showed a discomforting interest in certain parts of her body that were none of their business. And two, she preferred the company of people, dogs and barn cats to that of shaggy beasts who lived in a pasture.

So it was that Reaganne’s domain became the catch pen. The pen is next to the county road, so she grew up observing the comings and goings of people. Lots of people. People who stopped to see her so often that Reaganne would walk up to the fence to give them a closer look. 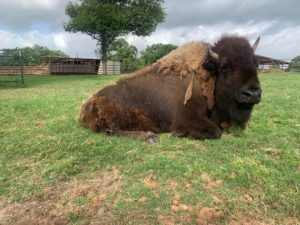 And now this special buffalo named Reaganne was out of her pen. Swinging my flashlight in a semicircle to scan for glowing eyes, I heard a soft “huff” behind me. Turning around, there she stood, less than 60 feet from the gate. I started to angle behind her to ease her inside, but she trotted off in the opposite direction. It is as if I could almost hear her laughing.

This wasn’t the first time Reaganne had pulled a Houdini, and we knew the drill: Be patient and lure her back into the pen with goodies. Like most bison, Reaganne considered attempts to herd her a marvelous game. Going into the pen needed to be her idea.

That would take time that we didn’t have. Reaganne would have to be hungry, thirsty or both to willingly go to her room. And we needed to drive to DFW Airport — three and a half hours away — to pick up NBA Assistant Director Jim Matheson for a Texas Bison Association conference. So we closed Reaganne’s gate to deny access to food and water, I fired up the truck and we headed north.

It was a long three and a half hours. I will spare you the details of my trial and the sentencing phase, but suffice it to say that the prosecution was brutal, the defense was less than stellar, and I have never been happier to see Jim Matheson.

We returned that afternoon to find Reaganne with a strange expression on her face. Hunger, we figured. I poured some fresh range cubes into the trough and Beverly’s little darling walked calmly into her pen.

As we parked the pickup beside a Toyota that my employer provided for my business trips around Texas, I noticed a helter-skelter collection of four-inch-wide scratches on the hood. Looking closely, it became apparent that the scratches were hoof marks. Bison hoof marks. Glancing over at Beverly’s car, we saw similar frenzied scratches…and a hoof-shaped hole smashed into the lower edge of the windshield.

The evidence showed that Reaganne had stood on the ground in front of each vehicle, reared up on her hind legs and attempted to mount it…exactly the way a bison cow will do when hinting that she wants to party.

A close inspection of my pickup revealed some horn rubs on the back quarter panels. That indicated that the damage had been inflicted the night before. Reaganne apparently thought the taller vehicle was a big boy she wanted to get to know better. It was a case of “if you can’t be with the one you love, honey, love the one you’re with.”