One of the first things we learn about buffalo (or bison) is from the infamous song, “Oh give me a home, where the buffalo roam…”. Yes, they do like to roam. 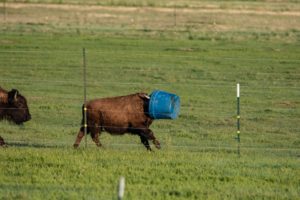 This past spring I had the bright idea to put mineral out in a plastic tub.

Of course, by the time I made it back to the house they had tipped it over and were now playing soccer with it.

I figured I would wait until they were off grazing somewhere else before I attempted to retrieve it.

The next morning I discovered I had waited too long. A yearling bull named Chaim now had it on his head. My first response was to grab my camera.

As I stood on the front porch recording this event, Tami was asking what we should do. I’ll be honest, I had no clue whatsoever.

Then instinct kicked in and Chaim decided to roam. This wasn’t a leisurely walk or a brisk trot, but a full out run. And of course, the others joined in.

We watched in disbelief realizing the impending train wreck that was about to occur. They were running straight at a fence. And right through the fence he went, right between the hot wires.

Amazingly, nothing broke and the rest of the herd stopped, inside the fence. Chaim had also stopped and was standing still in the ditch.

We stood there in shock for a brief moment and then ran for my truck.

The rest of the herd was standing at the fence as we eased up near him. I imagine his mother was having the same frustrated thoughts that we were having about raising teenage boys.

As I got out of the truck I started talking to him. He seemed calm and stood still as I approached him.

I noticed that the lip of the tub was stuck on one of his horns. Deciding I had one shot, I thought of pulling it off and making a frantic leap back into the truck.

I grabbed, he jerked and off he went, running down the ditch, tub still intact. But then he stopped, shook his head and the tub fell off.

When Chaim realized he had strayed, he wanted back in with the herd, and through the fence he went. Right between the hot wires, this time back where he belonged.

Published in The Buffalo Rancher, January 2019