We asked three lifetime RMBA members to tell us a little more about themselves. 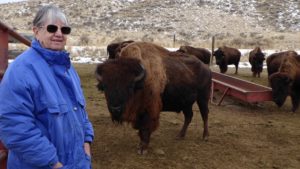 When John requested an article from me as a RMBA lifetime member, I realized that I really have been in this business for most of a lifetime. Years ago (1973), my ex-husband, Ron Smith and I started The Bisonsmiths south of Yuma, Colorado with ten calves. That herd grew to about 250 before we sold out in 1984. At that time I took my favorite cow to Dan Martin’s Lay Valley Bison Ranch and I have been active in that operation since then.

Our philosophy is expressed in our handouts and signs – we raise our bison naturally, chemical free, under low stress conditions with respect and care. We sell mostly retail to individuals directly from the ranch and at farmers’ markets, packaged meat or halves and quarters, hunts and some breeding stock. I am the “data keeper” for the ranch – managing the data base of animals, the ear tags, the mailing list, the taxes, etc. etc. During roundup, I don’t do much herding or sorting (not my strong suit) but I get to decide which animal goes to which pen – so if they’re in the wrong place – it’s then my fault!

One of the best memories of this many year bison endeavor is just sitting in the pasture and watching the herd – at any time, but especially in the spring with the new calves. I’ve always said I wish someone would pay me to do that – I’m happy to do it for hours!

Call me crazy – but I continue to enjoy being directly involved with bison associations – I am a founder of the ABA (a predecessor of the now NBA) and a founder of RMBA. I have been a board member, secretary/treasurer and vice president of both associations. I am currently treasurer of RMBA. One of the joys of being so involved in the associations is getting to know the people.

Buffalo people are the best!

In 2002, I was 15 and my father purchased our family’s first 13 bison calves establishing Nilisber (Nih-l-ih-s-ber) Bison Ranch. At that time, I was slightly disappointed they weren’t a herd of horses, but was mesmerized by the bison. Their grace and beauty captivated my attention immediately. That is the moment this unique creature had become my passion, a passion my family shares with me.

We outgrew our small property, so in 2014 Nilisber Bison Ranch purchased a property with plenty of room for growth. The last few years, our primary focus has been cleaning, re-planting, and establishing the pastures. Fencing has been an ongoing project that is still evolving.

Growing up and being involved with the bison associations has been an honor. One of my most memorable conferences with the National Bison Association is when I was in grade school. There I  saw a white bison on a reservation in North Dakota. The experience was almost magical, seeing her off by herself with a little red calf. The Association also provided bison shoulder bones for the ‘kids’ to paint and then auctioned off for a fundraiser. It was such a blast and a memorable moment painting with my two younger sisters and other kids in the bison community.

Another memorable bison adventure was in high school. My family visited a private bison herd on the side of a volcano in Hawaii. Their silhouettes formed into a herd of bison as they sauntered out of a low-hanging cloud.

Until 2017, I had only worked with my own herd. I had the opportunity to aid McMurtrey Ranch in Nebraska. It was an amazing experience. I had my first experience with preg-checking bison! With over 2,500 head of bison, the experience was nothing similar to my small operation. I have learned so much and appreciated the great opportunity.

The Rocky Mountain Buffalo Association and National Bison Association have provided opportunities to network with other ranchers and pick their brains. Growing up in the industry has provided me with many opportunities and fond memories I will always cherish.

Lucky 8 Ranch, established in 2014, is family-owned and operated. It had always been Dwayne’s dream to own his own ranch since he was a child visiting and working on his family’s farms in Canada. That dream became a reality after a quick road trip around Colorado, with his loving wife Tina, in 2012.

Lucky 8 currently manages 1,200 acres of varying terrain nestled along Trout Creek in Oak Creek, Colorado. Along with varying terrain we have vast panoramic views of Routt County that leave us speechless when out working in the fields. About half of the ranch is located on a reclaimed coal strip mine, which we have been continually reclaiming back to a grassland state. We manage over 200 head of bison along with horses, alpaca, llama, chickens, and ducks. We purchased our first bison in 2015 and quickly grew our herd, sourcing animals from all over.

Why did we choose bison over other livestock? Well… They look really cool and taste great. Over the last 3 years of raising these majestic beasts we have learned there is much more to these animals than what most people assume. After learning more about the bison tale, one really becomes humbled to be in their presence day after day.

Currently our bison operation is still growing. We only butcher a select number of animals per year, selling some packaged meats, but most has by the portion to local buyers. Within the next couple years, we hope to supply our meats to local restaurants in the area full time.

We also run an agritourism operation at our ranch offering horseback rides, ATV tours and snowmobile tours. Guests can come and learn the American Bison Tale and how they have stood the test of time and man. Along with the tours the ranch is a special event and wedding venue. Lucky 8 also has its own spice and seasoning line coming from family recipes handed down from generations. We love supporting our community, especially the Routt County 4-H. This year we received an award from the 4-H for being a business friend of Routt County 4-H.

Things we have learned since managing a herd of bison: have patience, respect, and DO NOT grab a calf without an escape route.

Published in The Buffalo Rancher, January 2019