Building on a great 2018, our 2019 has surpassed expectations with both our spring conference and fall ranch tour breaking previous records of attendance.

By Jen Graves, RMBA Board Secretary 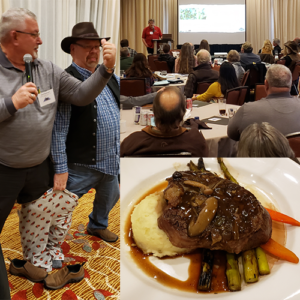 Our annual spring conference was held on March 2  & 3, 2019 at the Marriott Hotel in Westminster. Although it was a snowy weekend, approximately 90 bison enthusiasts gathered, and the association garnered nine new members.

As always, our spring conference included a General Membership Meeting and the association’s annual elections. President John Graves provided updates on RMBA’s new website, our expanded role with Junior Judging at the Gold Trophy Show and Sale (GTSS), and the priorities for the board in the coming year. Dave Carter provided an update from the National Bison Association (NBA). The membership also discussed and voted to start using the term “bison” in our association name. As if that were not enough, we also held our annual board elections.

Board Elections at Conference

Elections were held at the end of the meeting. Officer positions (i.e., President, Vice President, Secretary and Treasurer) are one-year terms. All current officers were re-elected to their position. Two of the four Director-at-Large positions were up for reelection. Both of the current board members, Nicole Jeffries and Ace Ward, were re-elected.

Following the general meeting, attendees heard 10 presentations over two days on topics such as:

Saturday evening included a bison filet dinner, a round of Bison Bingo and the annual benefit auction. The dinner was delicious. Proceeds from the auction and bingo game help the association keep the price of membership affordable. Plus, they are both fun. Money raised also enables the association to provide a scholarship to the second place winner in the Junior Judging competition at the GTSS. It also helps that Jud Seaman provides his Quality Auction Services to RMBA, which can be very fun to watch.

“It was one of the most lively and entertaining benefit auctions of our history and we appreciate all those who donated and purchased items,” said John Graves.

Of course, we could not do it without our sponsors: Adams Natural Meats, Frontiere Meats, Patty Smith, Rod Sather, Mosquito Park Enterprises, and the National Buffalo Foundation. Thank you sponsors!

Our fall tour was held on September 15. It included a morning tour of Brush Meat Processors (BMP), followed by a tour of Monkey Ranch. Over 50 RMBA members and seven non-members attended the tour. All but one non-member joined the association during or shortly after the tour!

Bob Dineen speaks to RMBA members during the BMP tour.

Welcoming RMBA to BMP was Bob & Laurie Dineen, Ace Ward and a few staff willing to come in on a Sunday to show attendees their beautiful facility. Rocky Mountain Natural Meats (RMNM) owns BMP. Their label, Great Range Bison, sells bison cuts from the premier bison ranches in North America. For the past 30 years, they have worked closely with their ranchers/producers to ensure the bison are raised on pasture, finished on grasses and grains, and are free from the use of antibiotics or growth hormones. BMP opened in 2013 to enable RMNM to guarantee quality by overseeing the product from the time it leaves the rancher until it goes to the consumer.

After being treated to coffee and donuts courtesy of BMP, members heard about the plant from Bob, watched a video of the facility in action and then took a tour.

The group then headed 100 miles to Rocky Hollow Buffalo Company’s Monkey Ranch. The ranch, owned by Rick and Lindsay Forepaugh, is 11 miles north of Kimball, Nebraska. Rick’s folks, RMBA members Vance Forepaugh and Jill Crotty, own Medicine Wheel Ranch in Elbert, Colorado. Medicine Wheel Ranch has had superior performance at the NBA’s GTSS. The bison are owned 50/50 between the two families and are raised at the Monkey Ranch. The two families then move the selected GTSS entries to the Medicine Wheel Ranch. Their 100% grass-fed, grass-finished buffalo are raised holistically and naturally, never subjected to antibiotics or hormones. As they like to say, they raise the animals “the way nature intended.” Their operation includes calf sales, meat sales to local restaurants, meat sales to private parties, and buffalo herd tours.

The Forepaughs had generously setup tents & chairs for a beautiful background barbecue. Following lunch, attendees heard about two new mobile phone apps created by the NBA: the Bison Producer’s app and Buy Some Bison app. Then the group split in two, each visiting the bison and touring the handling facilities.

Evening activities included personal introductions by attendees, poetry and a gourmet taco dinner. The tour would not be possible without the generosity and a lot of hard work by the Forepaughs. Thank you Rick and Lindsay!

The board makes a concerted effort to hold the spring conference on the first weekend in March every year, but it ultimately depends on the location, hotel availability and partner events.

2020 marks a very special summer event for RMBA; we will be co-hosting the NBA’s Summer Conference here in the Rocky Mountain Region. Please stay tuned to your email and social media for more information on this event. With the additional work that comes with co-hosting this event, RMBA does not plan to coordinate a 2020 fall ranch tour. We hope to see you this summer instead.

On behalf of the board, I would like to thank everyone who attended one or both of our events this year and we hope to see you for our 2020 Spring Conference.