In the late 60s and early 70s, while attending a fine Lutheran school as the only Presbyterian on full scholarship, I did some reading on the American buffalo and the animals seemed to fit with my “wild side.” Fast forward to the summer of ’72. I don’t remember if it was the conference or the buffalo that came first, but I do know that the fences and working system came much later. 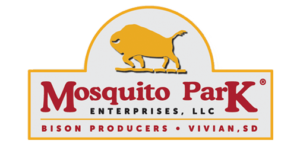 About that year the National Buffalo Association (NBA) held their summer conference in Pierre, South Dakota. It was at the King’s Inn, and the host ranch was the Triple U. I arrived just in time for the evening “social” which was held down in the basement. There stood smiling Dave and May Raynolds, from Lander, Wyoming, next to a steamship round. I said to myself, “A social, with red meat and smiley faces? I’m going to get along just fine with these boys!” It was one heck of a bunch!

At the Triple U Ranch, north of Fort Pierre, we enjoyed a buffalo burger lunch and a wonderful ranch tour. I marveled at the wide-open spaces, picked up buffalo chips on the prairie grasslands and watched hundreds of buffalo. We later enjoyed a buffalo BBQ, evening social and a fun auction. I believe that Bob Bradeen conducted the auction, as his son, young Ronnie, was with his babysitter.

Getting the Herd Started

In the fall, three guys from southwest Minnesota, ventured out in a borrowed van to Custer State Park Buffalo Auction. One of the gentlemen purchased two, two-year old bulls for slaughter. I, not to be outdone, purchased at least six calves. Anyway, the trailer was full.

We took one of my sister’s horse pens, scooped the snow away from the fences on the inside and piled it in the middle, then scooped it away from the outside of the fences. We cut the buffalo loose in their new winter home. You’d have thought they were mountain goats the way they climbed the snow piles. Life was good and the herd settled in. Three years later the first calf was born on Fathers’ Day. We watched the birth from a safe distance, with the telescope. A second cow delivered her calf soon after. The herd was growing and I was in the buffalo business.

As southwest Minnesota winters go, it snowed, the wind blew, the fence disappeared and the buffalo wandered, came home, and wandered, came home and wandered. There were reports at the local saloon and eatery that buffalo were roaming wild in this country. While in pursuit of the roaming herd, I was stopped by a State Trooper. When I said, “You won’t believe this, but my buffalo are out.” His reply was, “You must be Rod Sather!” 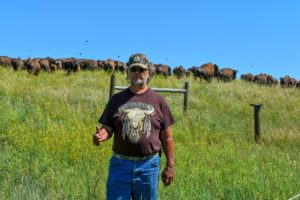 In 1993, I found myself bird watching in Lyman County, South Dakota with my friend Dean Schumacher. I couldn’t resist living in an area so rich in wildlife so I ended up moving to Lyman County to a place so muddy it was christened “The Muddy Boot.”

Soon to follow was the Wells Ranch, located 12 miles north of the Muddy Boot. More buffalo started to appear on the landscape. Fellow Minnesotans, Chad and Suzie Kremer arrived in Lyman County. All of a sudden fences were built, corrals were going up and a handling facility was in operation. Our buffalo, for the most part, chose to stay at home. The buffalo cows were “range-cake trained,” which is an absolute must in keeping them happy and remembering where home is.

The herd grew and grew. The neighbor’s Little Cedar Ranch was for sale, so the herd grew more. We were excited and optimistic about the buffalo industry.

In 2010, it was time to move on from ranching. We sold the ranch and the buffalo, but remained involved in the industry, buying and selling a few buffalo.

Following the IBC in Quebec City, Lynnette lured me to the forests of Saskatchewan, a favorite hunting location of mine. The Lyman County Herald would later post the following: “Big news! Big news! Confirmed bachelor and perpetual single guy, Rod Sather, and longtime girlfriend, Lynnette Laird, were married August 2, 2012 at a full moon party and destination wedding in Big River, Saskatchewan, Canada. They honeymooned in Rocky Mountain House, Alberta. The handsome groom was dressed in his best buffalo hide clothing, with buffalo jewelry. The beautiful bride was dressed in the finest silk France has to offer, accented with her silver buffalo jewelry. Congratulations to the new couple.”

After attending the 2013 NBA Summer Conference in Deadwood, we hopped in John Cammack’s pickup for a ranch tour. His herd came to greet us over the hillsides like a scene out of Dances With Wolves. It was a wonder to behold, and I turned to my bride and said, “We need some buffalo!” Luckily we hadn’t sold all the land, so back to ranching we went. At the DTBA “Girlz Gone Wild” and the “Young Guns” sales we were busy bidding and filling up the trailer. Today we are up to around one hundred cows in two herds.

At the 2018 DTBA Winter Conference I was honored with their Pioneer Award. I am so very proud to be part of the bison world, with so many fine hardworking and fun loving folks that I’ve met and mingled with over the years.

Over the years some of the old buffalo people have said, “We need a buffalo ‘rehab’ place; A place to gather with other buffalo folks”. We have put that together near Keystone, South Dakota, just 10 minutes from Custer State Park. The Bison Rehab and Huckleberry Social Club has been opened at the Hayward Valley House Vacation Rental. Booking can be done at BlackHillsRetreats.com. We’d love to have you visit!