This free, annual event is open to individuals between 8 - 21 years of age, who are academically eligible (i.e. passing all classes). Participants judge four classes of bison and provide oral reasons on one class, as selected by the judges. Everyone participates individually and is eligible to earn a scholarship. Additional recognition is provided for the top three registered teams and the top three junior participants (12 years of age or younger). 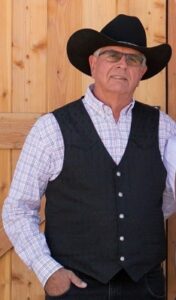 Larry shared his knowledge and passion for bison with everyone, including children. In 2008, his son Josiah was the first person to join the NBA as a junior member. Larry saw the value of getting kids, including his own, involved in the industry at a young age.

The National Bison Association launched the Junior Judging Contest in 2008 and it wasn't long before Larry volunteered to help. RMBA now partners with the NBA to run the competition. Unfortunately, Larry passed away in 2021. That same year, the event's name was officially changed to The Larry Higgins Bison Junior Judging Contest to memorialize Larry's impact on the bison community.

Photos used on site are provided by members and require member permission for any & all use.
©2022 Rocky Mountain Bison Association. All Rights Reserved.